The CMO Survey tracks social media spending as a percent of marketing budgets. Since 2009, survey participants have reported on current spending, spending in the next year, and spending in the next five years. Current levels of spending have witnessed a 234% increase over this seven-year period, rising from 3.5% of marketing budgets in 2009 to 11.7% in 2016.  This growth rate attests to the importance companies place in these new marketing strategy tools.

There are several possible reasons for this gap. One reason may be a bandwagon effect where companies see a lot of hype in the media about social media spending and feel pressured to spend what they observe (or think) other companies are spending.  Ultimately, spending fails to meet hyped-up expectations and the bandwagon fades.

Figure 1. Actual Versus Predicted Social Media Spending as a Percent of Marketing Budget

A second reason may be that companies fail to account for the effect of their own and competitors’ activities, producing a situation in which consumers are saturated or turned off by company involvement in social media. This means each dollar spent is less effective than before, and over time, this dampens companies’ willingness to spend.

A third reason could reflect the possibility that social media budgets are not being funded from marketing’s budget to the degree that that they were in the past.  As social media gains acceptability as a strategic tool, funding may be coming from other areas of the company.  In other words, actual spending may be as high as the marketers’ earlier expectations, but it may be sourced from other budgets.

The fourth and most compelling reason is that companies fail to effectively utilize their social media investments. When this happens, acceptable ROI is not achieved and budgets are reduced below past expectations. Success in the social world of marketing requires a deep connection to the customer and the ability to drive a transformation of the company to embrace a whole new type of customer engagement. Many companies lack the knowledge and skills to make this happen.  Some indications of this situation include: the fact that almost half of firms (44.1%) say they haven’t been able to show the impact of their social media spending; the ability to integrate customer information across social media, other communications, and purchasing channels is weak and not increasing; and only 4.6% say social media contributes very highly to company performance.

There are clear winners and losers among the social media tools in this same time period. Looking at table 1, we see that social networking (e.g., Facebook and LinkedIn) and microblogging (e.g., Twitter) have increased over the seven years while other techniques such as blogging, podcasts, and video sharing have decreased. 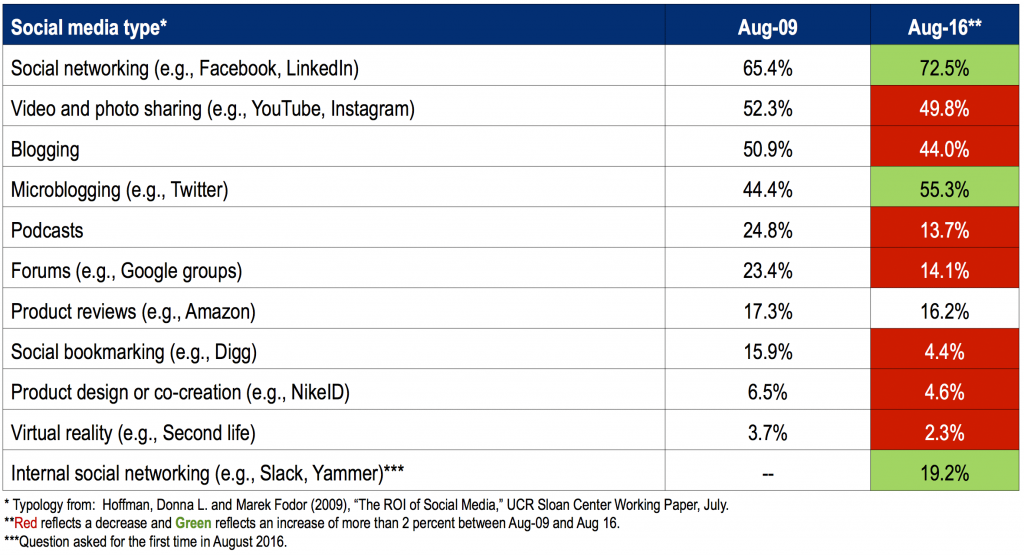